Living in “sympatry” with sympathy: a story of tamarins at Los Amigos!

Living in “sympatry” with sympathy: a story of tamarins at Los Amigos!

Their long and sometimes prehensile tails, and their capability to climb and jump among tree branches are a few of the key features of Neotropical primates. These highly arboreal organisms are perhaps one of the most charismatic groups in a tropical forest. Los Amigos harbors eleven primate species, from the largest and highly vulnerable spider monkey (Ateles chamek) to the smallest and very rare Goeldi’s tamarin (Callimico goeldii). Among the eleven, two sympatric tamarin species are the most abundant. These are the weddell’s saddleback (Leontocebus weddeli) and the emperor tamarin (Saguinus imperator). Both primates are subject to the largest mark-recapture program in Peru, and one of the largest across the Amazon basin led by Field Projects International (FPI) for almost a decade. Each year, FPI captures ~60 primates at Los Amigos, and tags each of them using distinct beaded collars, while also fitting the breeding female in each group with a radio collar allowing the whole group to be monitored with the aim of understanding the fascinating biology of free-ranging tamarins. 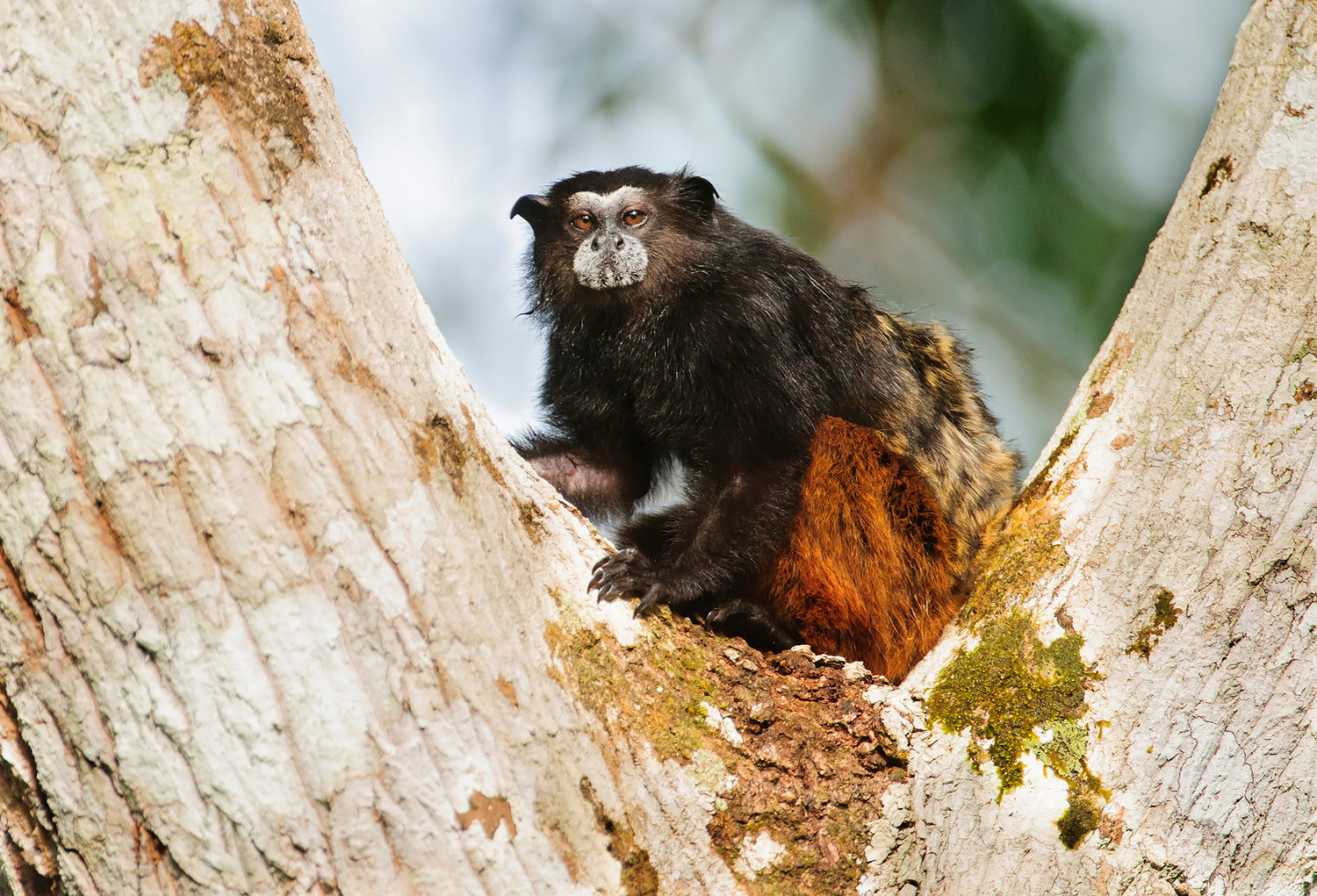 Why choose these primates as the study object?  It’s not actually because of their adorableness, but due to the unique reproductive behavior of Callitrichids, the family of primates that comprises marmosets and tamarins. Tamarins display a cooperative breeding system, known as “alloparenting,” where the offspring are taking care of other individuals rather than their biological parents. Adults or subadults within the group collaborate in different tasks such as infant rearing, provisioning, and transportation, hereafter called helpers. Moreover, Callitrichids do not mate with one single individual throughout their lives but instead can breed with individuals within or outside the group over time. And last but not least interesting, tamarins have unique reproductive adaptations such as twinning, which embraces >80% of all births. Having helpers in a group is a smart adaptation to overcome the high costs of nursing and rearing twin offspring. Similar to having a nanny take care of children, helpers take care of the offspring and in compensation, they receive valuable resources, protection from predators, while also guarding and protecting its group.

The helpers’ role is crucial for offspring survival, therefore understanding how many are present in a group and/or who are they (i.e. females or males, development stage) is critical to determine group reproductive output. FPI researchers assessed which developmental classes determined if a tamarin’s group had offspring and the number of offspring. Developmental classes were determined by morphological measurements taken over five years through the mark-recapture program and were independent of age. Each class represents the capability of an individual to participate in the mating system of the group. The results of this study showed that primary breeding females and larger group size increased group reproductive output and that primary breeding males are important for infant rearing.

This was a snapshot of the larger, long-term monitoring of tamarins by FPI. Tamarins are without a doubt enchanting characters, but understanding their ecology is critical to effective conservation strategies.