Great Tinamou egg predation caught on camera at our lodge!

Great Tinamou egg predation caught on camera at our lodge!

Long, daily hikes in the forest always reveal remarkable events in nature, which could be easily overlooked if not for our curiosity for nature and its complexity. The Los Amigos Bird Observatory (LABO) is currently studying the ecology of the 11 sympatric tinamou that cohabit the forest at our Los Amigos birding lodge. Unfortunately, a male tinamou, whose presence would have certainly increased the survival rates of these beautiful eggs, was not found incubating the nest.

A few months ago we described tinamou egg coloration, and how male incubation and high nest attendance increase the threats posed by the bright coloration of tinamou’s eggs. Great tinamou (Tinamus major) are one of the largest (1500 g) tinamou species in the Amazon, laying large (56 – 63 mm), turquoise colored eggs between buttresses right on top of brown leaf-litter on the forest floor, without an elaborated and secured nest. Studies on the incubation behavior and nest attendance of Great tinamous have reported that males protect their eggs feverishly, unwilling to leave the eggs and remaining immobile during incubation, even allowing researchers to touch them! But, clutch abandonment can occur when the individual is highly or constantly disturbed, forcing the tinamou to leave and fly quickly out of the nest. Unlike other birds such as emperor penguins, Great tinamous do not mate for life, but rather are highly promiscuous. A female mates with different males, and then lays the eggs that will be incubated by the males. Males can incubate clutches of a single female (3 eggs) or of several females (up to 8 eggs). 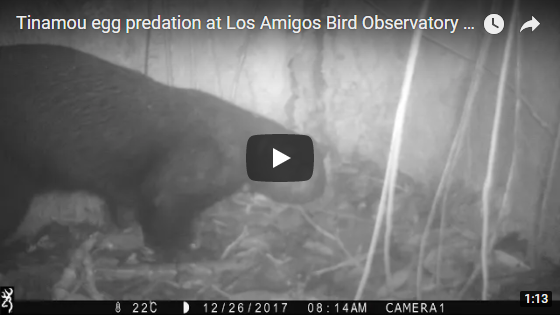 The Great tinamou clutch (8 eggs) found at Los Amigos, was most likely laid by several females and abandoned by the male tinamou after constant human disturbance (i.e. researchers presence along the trail) near the nest. A camera trap was deployed near the clutch in order to record the (hopeful) return of the male tinamou, or more likely to observe their predation. The male tinamou did not come back, but instead of being left with nothing exciting happening to the nest, the camera trap recorded several independent moments of predation. The nest was frequently visited by rodents, three times by a tayra (Eira barbara), and four times by a white-throated toucan (Ramphastos tucanus).  During the total number of visits of the tayra and toucan, they took 4 and 3 eggs each respectively. The remaining egg could have broken, with the content being eaten by the rodents or tayra that was sighted once without taking any eggs from the nest. All these events happened in one month, after which the clutch vanished, leaving us with the hope that somewhere else in Los Amigos forest, another male is peacefully incubating a tinamou clutch! 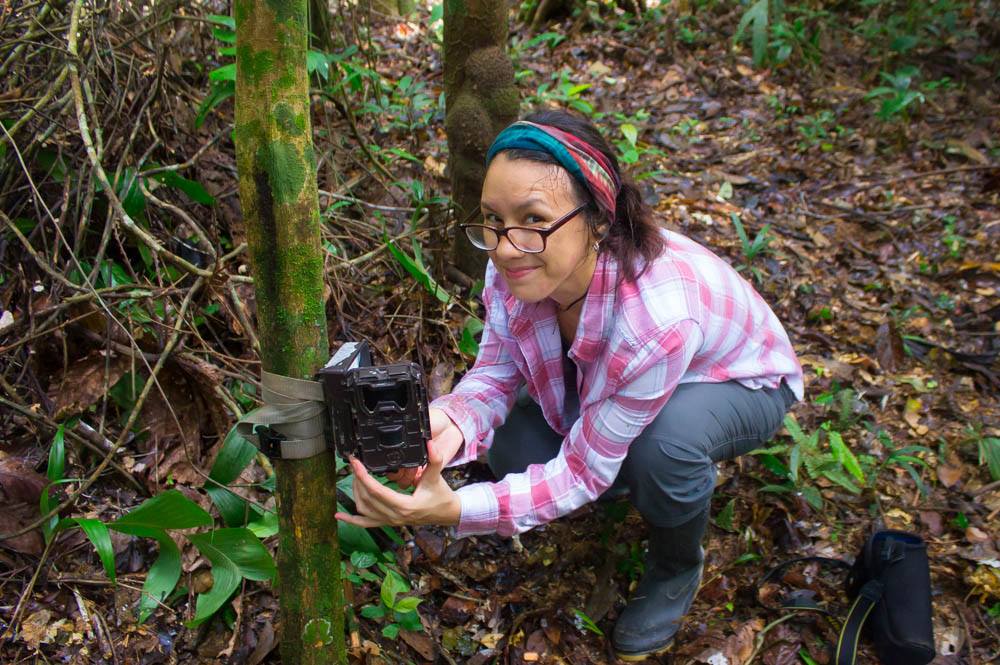